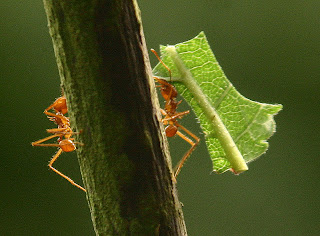 Anyone who's been reading this blog for a while knows that I live in a forested valley teeming with wildlife that often gets much too close for comfort. Vipers, hairy spiders the size of dessert plates, centipedes, bats, foul-mouthed frogs, quarrelsome manicou families - we live intimately will them all. I've never mentioned bachacs, though, because they've never posed a problem.

I like walking outside at night, and sometimes I open the front gate and stroll in the street for awhile, enjoying my favorite time of the day. It's a quiet street but I don't go very far, just to the end of our wall and back. About a month ago, as I strolled along the grass verge, I saw something strange: a dark, foot-wide swath stretching across the paving. Closer inspection revealed it to be thousands upon thousands of bachacs going about their business.

The bachac is Trinidad's leaf cutter ant. It's about half inch long, medium brown, with a hard body and mandibles that can give you a painful pinch but not take the piece of flesh off like its cousin the tac-tac. Bachacs are a common sight, bustling along in single file, each carrying a shorn piece of leaf back to the underground colony where they grow their fungus gardens. Never, ever, have I seen anything approaching the numbers of them that I saw crossing the street that night, those going away from our wall carrying their cut leaf sections on high, those going toward the wall carrying no load. My eyes swept the wall. There they were, a wide band of them, moving up the wall like a dark insect wave and disappearing down the other side into in our yard. 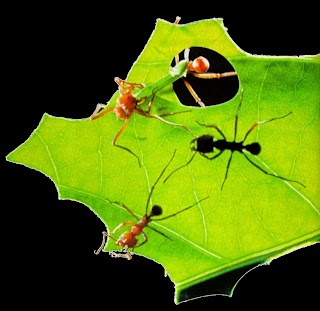 There's something very unsettling about the sight of millions of insects, apparently moving with one mind, coming at you. When we lived higher up the valley, a four-inch wide column of large jungle ants marched down the mountain, crossed the neighbour's lawn, entered our yard through the chain link fence and began to swarm the laundry room which was separated from the house by a narrow passageway. It took a lot of wild scrunching of ants and dispersal of cans of insecticide before they got the idea that they weren't welcome. Watching this bachac invasion didn't come close to that hysterical experience, but it was still somewhat unnerving.

I couldn't imagine which plant they were decimating but I wasn't left in suspense for long. Over the next week or so we noticed that a line of variegated crotons planted on the inside of the wall was beginning to look a bit sparse. Days later, they were naked twiggy sticks shorn of every leaf. That was when my mother took herself off to the garden store and brought home a small plastic bag of bachac bait. She scattered it around the base of the wall. The next night the bachacs were still there, crossing the road in a thick swath. When I checked on the second night there wasn't a single bachac to be seen. The poison had done its work.

As always, when we tamper with nature I feel a twinge of conscience. I even feel it when I kill poisonous snakes in the yard. But it had to be done. My mother's vegetable garden has been devastated by the heavy rains; now that we're entering the petit carême, the short dry season in the middle of the rainy half of the year, she's putting her yard back into gear: ochroes, dasheen, sweet potatoes, patchoi, peppers, lettuce and tomatoes are all going into the dirt. With food prices going through the roof right now there's no way she'll allow the bachacs to reap what she's busy sowing every day, pottering around in her big ridiculous straw hat, holey jeans and the bright green Crocs I got her in the hope that she'd stop ruining all her good shoes in the yard.
Posted by Liane Spicer at 11:14 11 comments:

Two weeks ago I discussed the things readers can do to help their favourite starving authors. Today I'm across on Novel Spaces again looking at the stuff readers should not do:

How To Help A Starving Author Part 2: The DON'Ts
Posted by Liane Spicer at 08:11 No comments: