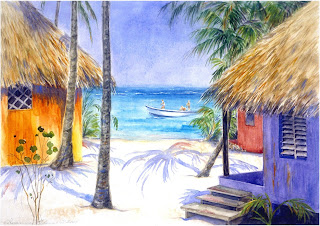 Writing coaches recommend that writers use local color in their stories to make them come alive. Every location, real or fictional, has unique sounds, sights and flavors. The characters in a story don't live in a generic town; they live in a town in a particular place where the stench of the swamp permeates when the wind blows south,
where little blue buses called "Conchita" bustle along the main street, where a paraplegic veteran sits in a cart in front the courthouse and curses the gov'mint every Saturday morning.

I'm from the Caribbean so a reader might expect to find a certain island flavor in my stories—infusions of hot sunshine, white beaches, clear turquoise waters, lush vegetation, and market stalls heaped with mangoes and pineapples forming the perfect pictorial background to my scenes. They might expect colorful characters from the postcolonial melange of cultures, the syncopation of reggae, calypso and reggae—and they would very likely find these. But local color extends far past the touristic image of a tropical paradise. Those elements are not the whole picture.

Particularly exciting to me are the languages, myths and legends of the region. There are many versions of English, English Creole and French Creole spoken in the Anglophone Caribbean, varying from island to island and even within territories.  Then there are the myths—the tales of jumbies in Trinidad (duppies in Jamaica, ghosts elsewhere), the lagahoo (loup-garou or werewolf elsewhere), douens and La Diablesse... Penetrate deeper and a kaleidoscope of fantastical human, animal and supernatural characters emerge.

Some myths blur the lines between reality and fiction. When I was a child one of the tales with which my father held us in thrall was the story of the giant snake. It lived in forest pools, he said, and every so often it would come out and raid nearby villages, swallowing livestock and children whole. This horrifying creature was called a wheel, and years later, whenever I swam in deep forest pools after a long hike, the image of the wheel lurking below never failed to send shivers down my spine even as I laughed and splashed with my fellow adventurers. Suppose the thing was real? Why was it called a wheel anyway? Did it put its tail in its mouth and roll through the forest like a hoop? Suppose one lived down there? Would it emerge from the green, shadowy depths and pull me under where it would proceed to swallow me whole as I thrashed in vain, while my companions ran (or swam) for cover?

I subsequently discovered that the snake is not a wheel but a huile, French lexicon creole for oil, and the name is derived from its fluid movements in the water. The huile is also known locally as macajuel, a Spanish creole form, I think. It is a type of boa constrictor and is related to that famous South American giant... the anaconda. My father did not invent the huile; the darned monster is real.

The more I write, the more I feel the urgency to capture the colors of this place. The old spaces are being razed; the old words are dying out, replaced with the Americanisms of cable television. I remember standing in front of a literature class a few years ago—we were reading a novel by local novelist Michael Anthony—and not one of those teenage suburbanites knew what laglee was. (It's the sticky white sap of the chataigne or breadfruit tree that's spread on twigs to trap birds.) When I was a child no boy worthy of the name would be ignorant of the existence and applications of laglee. The colors are fading fast, including those of the old characters, the lagahous, douens and that man-eating she-devil, La Diablesse, who are retreating further and further into what's left of the tropical forests.

There's only one way to keep them alive: on the pages of our books. Keeping them alive has become an important part of my mission. Do you feel a compulsion to conserve the colors of your patch of earth?