My space-making project is moving apace! The winner of Book Giveaway #1 is Wendy who blogs over at It's Really Only a Purple World. Wendy, congratulations! You've won yourself a copy of Note to Self by Andrea Buchanan. 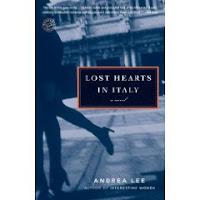 You know the drill: leave a comment and you're entered in the draw. The winner will be chosen and announced next Thursday when the new title is posted. Suerte!
Posted by Liane Spicer at 00:01 7 comments: 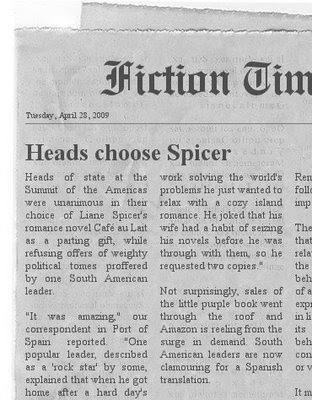 Click here to read the article. Thanks for the heads-up, Karen!
Posted by Liane Spicer at 17:37 10 comments:

Email ThisBlogThis!Share to TwitterShare to FacebookShare to Pinterest
Labels: humour

Book Giveaway #1: Note to Self by Andrea Buchanan

April 23 is a symbolic date for world literature for on this date and in the same year of 1616, Cervantes, Shakespeare and Inca Garcilaso de la Vega all died. It is also the date of birth or death of other prominent authors such as Maurice Druon, Vladimir Nabokov, Josep Pla and Manuel Mejía Vallejo.

Beginning today, this blog will be giving away a book a week for the next seven weeks or so. I'll post the name of the book on Thursday and anyone who'd like a chance to win it should leave a comment to this effect. The winner will be chosen and announced the following Thursday when the new title is posted. Capiche? Wherever you are in the world, I'll mail your prize to you. In addition to sharing the joy of reading, I'll be making some much needed space on my bookshelves! :)

First up: Note to Self: 30 Women on Hardship, Humiliation, Heartbreak, and Overcoming It All by Andrea Buchanan. Brand new. Hard cover. Simon & Schuster January 2009.
Posted by Liane Spicer at 08:01 41 comments:

My interview with Toronto-Lime.com has been posted on their site for a week, but I've only just found it:

Good job, Ms. Robinson. I really like this!
Posted by Liane Spicer at 20:37 9 comments:

Hugo Chavez vs. President Obama at the 5th Summit of the Americas

I just watched President Obama get off his plane and lope along the red carpet at Piarco Int'l Airport here in Trinidad - watched on television, that is - and my initial impression, obviously shaped by my profound analysis of the issues surrounding this 5th Summit of the Americas, is: Lawdie, Lawdie! He's hawt! My sister doesn't see what I see, though. She insists I just like skinny guys.

Now that I've succeeded in disgusting you, let's get back to those issues...

Monster frogs and fridges in match-to-the-death 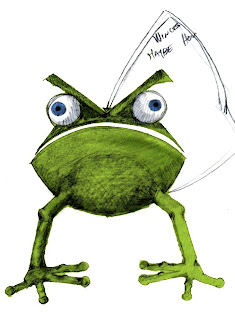 My mother has a weird habit of trying to converse with me while I'm obviously fast asleep. Hello! The room is dark, I'm bundled in covers, my eyes are shut and my mouth is probably agape and drooling all over the pillow or something, so even a casual observer might deduce that I'm asleep and go away. Not my mother, who has just seen something on TV that she must, MUST share with me IMMEDIATELY! Yes, the same mother whom nothing enrages so much as being disturbed while she's - ah-ha, good guess - asleep. Go figure.

It's 'fo-day morning on Easter Sunday which in Trinidadian means before daybreak, in this instance somewhere around five, and I'm fast asleep. I had an eventful day on Saturday, went to bed long after midnight, so as you might imagine I was under, and deep. I have a vague recollection of my bedroom door bursting open, light striking me in the face, and my mother's excited voice going on about "something behind the fridge". I struggle to the surface, partially, and with my usual scintillating morning wit ask: "Huh?"

I try to listen, but my fan is roaring away on high (no, not in heaven, although it's headed there soon; I mean the 'high' setting). I hear a faint sound that I don't even try to identify. It doesn't sound threatening enough to send me running for the cutlass, like that time she woke me because there was a "big snake" in the bricks under the water tank, of the genus "bad", according to her expert identification. (That monster turned out to be a black plastic garbage bag blown by the wind, and I made short thrift of it: Avaunt! Ho! Begone!) I begin to sink into sleep again but she comes back, even more alarmed: "It sounds like some big frog or toad or something!"

Now, we've had our share of wildlife encounters in this house so that's not outside the realm of what's possible around here, but if I have to go and engage in a duel with some froggy hideousness I'd need a bit more sleep first. After all, the last samurai-ninja-attack-frog I'd had a battle of wits with in this house spoke to me, and what it said is unrepeatable. Not that it spoke English, mind you, but I had obviously been cursed out in the worst way possible in froginese. Being cussed out by a frog shakes you up. Leaves a mark.

Realizing that I was not leaping to defense of home and hearth as was my wont, my mom disappeared. And returned. Again. "You awake?" Hell, I am now! "I think it's the phone. I left it charging on top of the fridge and it's making a funny noise."

Yup, folks. Apparently the naughty niece and nefarious nephew were hanging around here yesterday and playing with the granny's phone was part of the scheduled entertainment. One of the standard Nokia ringtones is a frog sound, but my mother doesn't know that because, despite being of average intelligence and having owned about three mobiles to date, she is hopelessly cellphone challenged. She set the thing to alarm at some ungodly hour, and boy, did it succeed. In alarming, that is.

And now for the score... Cellphone and grandchildren: game, set and match. My mom: humiliating and shame-faced defeat.

The best part? I couldn't go back to sleep. I tried, but the moment was gone. Yay. Happy Easter.
Posted by Liane Spicer at 20:31 8 comments:

TORONTO-LIME.COM has posted a release on Café au Lait. I know some of you non-Trinis are wondering why a Toronto site about citrus fruits is mentioning a romance novel. Well, here we go: Lesson 1 - Speaking like a Trini.

lime
Origin: Trinidadian
Meaning: (v) hanging out/socialising in an informal relaxing environment, especially with friends, for example at a party, or on the beach. Usage: "We liming on the beach today."
(n) an event at which liming takes place, e.g. a party. A gathering of people engaged in activities associated with liming. Often qualified using an adjective e.g. big lime. Usage: "That party going to turn out be a big lime."
Ref: The Urban Dictionary

Yes, folks, TORONTO-LIME.COM is the premier site for Trinis and Triniphiles in Canada who want to be in the know about everything on the Trini entertainment scene. Want updates on fetes, Caribana, Carnival, DJ info, soca music, Caribbean links, Caribbean news, photos, West Indian jokes, facts, history, contests and more? Sign up for their newsletter and Join De Lime!
Posted by Liane Spicer at 19:07 15 comments:

...while rescue workers tried in vain to pull her from under the TBR pile...

I'm sure there are people out there with to-be-read piles that dwarf mine - but that's hard to imagine right now. My bedhead bookshelf is stuffed with new titles, there are more piled on top of it, and others are winging their way from Amazon at this moment. Here's a sampling of the ones balancing over my head:

Zen in the Art of Writing by Ray Bradbury
The Artist's Way by Julia Cameron
Forever My Love by Jeff Rivera
The History of the Maroons by R.C. Dallas
The Beauty of Color by Iman

Those have been hanging around since last year. Then there's To Ride the Chimera and Wolf Hunters, both by Kevin Killiany, a friend to this blog; Sacred Clowns by Tony Hillerman; King of the Wind by Marguerite Henry... I'm embarrassed to continue.

You'd imagine that a rational person would refrain from ordering books at this juncture, but I obviously can't count myself among the ranks of the reasonable and level headed. I've pursued a lifetime love affair with all things Italian, from my taste in movie stars as a teenager to my taste in food and landscapes. The movies The English Patient, My House in Umbria and Under the Tuscan Sun just honed my obsession, and then, a year ago, blog friend nyc/caribbean ragazza left her LA film producer job and moved to Italy where she now lives and writes. I was reading her blog this week and there was a quotation by Andrea Lee, an American writer living in Italy, and the end result was the addition of Lost Hearts in Italy to my Amazon cart, where it landed right next to A Thousand Days in Venice by Marlena De Blasi, so what was I to do? I threw in On Beauty by Zadie Smith for good measure, and clicked the checkout button. 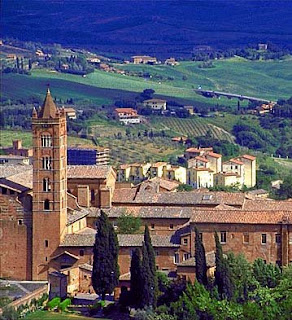 A Tuscan view
My wish list is also scaring me. There's so much stuff in there, including a bunch of books by writers I know online whose books I must read. But I need to get on with the ones I have lying around here so, if you see me heading anywhere in the direction of Amazon again, looking furtive and shifty-eyed, please, I implore you, head me off. Use any means necessary.