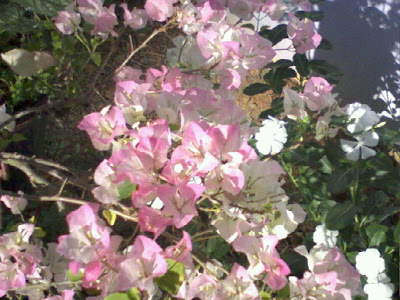 I was with my mother the day she bought this plant. We had gone to Central Trinidad to look for bargains - or rather, she had. I was just along for the ride, providing her with company and a sense of security as she doesn't like to drive far from her familiar haunts alone. The plant was little more than a twig in a pot, but it was covered with masses of the most beautiful bougainvillea flowers I'd ever seen. (To be botanically correct: the tiny white splotch in the middle of each bloom is the real flower, and the colourful parts surrounding it are actually bracts or modified leaves.)

"Should I buy it?" she asked, indecisive as usual, eying the exorbitant price tag. 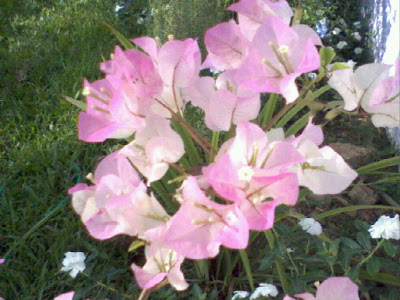 That was at least two years ago. It's still in a small pot, but the twig is somewhat larger now. Several times a year, particularly during drier spells, the flowers emerge, and they're a sight to behold. When they fall they continue to enchant, looking like the most delicately hued rose petals scattered in the grass. That was money well spent. 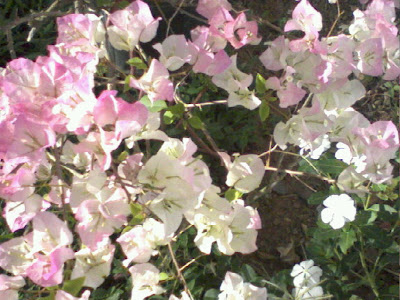 The small white flowers in the background are periwinkles, or 'Old Maid' as they're known here. Our common varieties of periwinkle are so hardy they flourish in cracks in concrete. We tried planting an entire border of the more exotic, hybrid varieties and they all died out in a few months. That was not money well spent.
Posted by Liane Spicer at 00:11 12 comments:

Are you a pack rat or a word rat? Join me as I blog on Novel Spaces today about the stuff I can't throw out.
Posted by Liane Spicer at 00:01 2 comments: 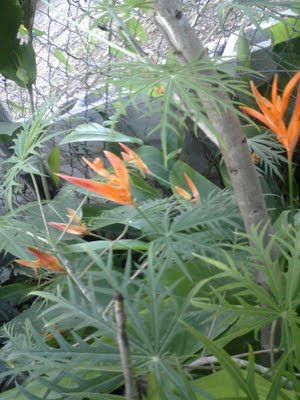 Heliconia flowers in border
I started fiddling with my cellphone cam again since my son showed me that I can change the resolution etc. etc. Yeah, yeah, I've had it for a year and a half and didn't figure out I could do something about the teensy tiny images I've been getting. That's what children are for - to point out the blatantly obvious to their technically challenged parents.

Took a bunch of yard shots but most are badly pixellated (my son's word) so I'll have to tinker a bit to get the hang of things. The one above is of my mother's heliconias in a border, mixed with a miscellany of other plants that all grow happily together. Too happily, if anything. Ignore it all for a few weeks and it turns to jungle.
Posted by Liane Spicer at 15:22 8 comments:

I'm posting over at Novel Spaces today on Anti-writing. See you there!
Posted by Liane Spicer at 00:01 2 comments: