Micromanaging, overediting and knowing when to stop

When the Novel Spaces group blog went live two years ago I watched over it like a fussy mama. As co-coordinator, I wanted everything to be purrrrfect. I checked the list of posts already written and scheduled, and noticed that one author had not pre-scheduled his first post. No problem, I told myself. People have different approaches: some will prepare weeks ahead while others will create and post at the very moment they're supposed to go live...
But there I was anyway, minutes to midnight, just before my friend's post was to appear, and there was no sign of his article in the lineup. Sheesh, I wondered. Maybe he forgot, it being a holiday weekend and all. I trotted over to Amazon, did some window shopping, then returned to the blog and checked the list of posts again. Nothing. I shot off an apologetic e-mail to the guy, something along the lines of: Sorry to be a nuisance - but did you forget today's your day to post? Then I clicked over to check the blog once more before I went to bed - and there it was! My friend's post! Right on time, too.
Needless to say, I felt like an idiot. I don't like anyone looking over my shoulder, sniffing at my heels, or whatever analogy there might be for just being ANNOYING! So why was I doing that to other people? Couldn't I have waited at least until the next morning before I started firing off nagging e-mails?
I made a resolution that night: Don't be a bloody pest. Leave grown people alone to do what they have to.
This obsessiveness carries over to my writing, sad to say. I know writers who never rewrite, who edit as they go, submit their product when they get to the end and then move on to the next project. I'm at the other end of the spectrum: when I get to 'The End' my work is just beginning. If I re-read my manuscript 50 times I find things to change each of those times. I delete, add, modify, shift around, rename, reword, rephrase, restore to the original, shift back again and generally edit until I reach a point where I have to say: Hands off. Leave it alone. Didn't you hear me? Step away from that @#$%*! manuscript!
Overediting is a real danger to writers, just like micromanaging is to organizers. You run the risk of running past the point where your nit-picking is beneficial and you begin doing real damage. Instead of growing stronger, the work grows weaker as you focus more and more on minutiae and begin to lose sight of the big picture. Recognizing that point is vital, and truly difficult for micromanaging, perfectionist, anal-retentive writers - like me.
—Liane Spicer
Posted by Liane Spicer at 00:36 4 comments:

View from the Caribbean 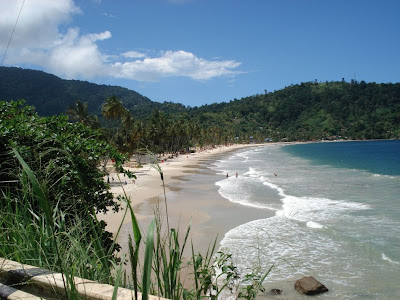 Maracas Beach, one of my favorite places
Okay, so I live in paradise. I admit it. Can we get past the sun, surf and sand for a moment and look at how location, and this location specifically, impacts on this writer?

When I started the writing gig years ago there were built-in handicaps. Queries were sent by snail mail and the intervals between sending out and getting a response were epochal - if a response were indeed forthcoming. I used to imagine agents looking askance at my stamps, opening the envelope gingerly and thinking: Trinidad? And what are these? International mailing coupons? How... quaint! just before throwing my stuff into the recycle bin. I didn't send out much and I'm eternally grateful to the editors and authors who responded to my neophyte approaches. Debbie Macomber was one. Karen Thomas another.

A breakthrough came when I signed with a local courier company. They provided a US mailing address and, for a reasonable fee, delivered mail to my door. That first company even took my letters and packages and mailed them from within the US. There was a lag, of course, but it was still a huge improvement. The problem was not the courier but the pace at which anything happens in the publishing industry. Months, sometimes many months, would elapse before I got any response from agents and editors.

Four months after I sent out the first round of queries via my courier, I discovered a website that listed agents who accepted e-queries. I sent out a batch and most agents responded, some within days, others within minutes. Not only did they respond, they were lovely and encouraging. That first week I got five requests for submissions, and two months later received an offer of representation. About twenty minutes into our first telephone conversation I pointed out to the agent that she was calling Trinidad. "Oh, that's all right," she responded cheerfully. "We have clients all over the world!" This, dear reader, was my kind of agent.

Over the past few years my location has been of little consequence. Not only do I conduct most of my business over the Internet, but I also discovered a great network of writers and friends across the globe, a network that I can access with a few clicks and keystrokes. I don't even have to put on makeup and leave the house! Right now, I believe, is the best time ever to be a writer stuck on a little rock thousands of miles away from, well, everything.

I've got a bit of news for authors of all stripes: 'Indie' publishing is not a free pass.
The new technologies make it possible for writers to bypass the gate-keeping functions of literary agents, acquiring editors, copy/line editors and proofreaders. Writers/authors can now offer their products directly to the customer in digital form. Say what you will about the traditional publishing model, the fact is there was some measure of quality control. The absence of these standards in the new model is proving disastrous to, if not the viability, then the integrity of self-published or "indie" e-books.

According to Rich Adin in The Digital Reader:
"I have to admit that part of the problem is the poor quality of so many ebook offerings ... of every 10 ebooks I acquire, I am certain that 8 or 9 will be trashcanned within the first 30 pages of reading."
Continue: Novel Spaces: Authors, clean up your act.
Posted by Liane Spicer at 01:34