Burglars & snakes. There's paradise for ya...

Maybe it was just a matter of time, the state of crime being what it is in these parts, but we've been robbed. Almost everything of value is gone: laptop, jewellery, DVD player - even my LL Bean backpack, apparently appropriated by the thieves to carry their haul away. I'm trying to be upbeat but seriously? It was horrible. It still is. I alternate between wanting to throw away whatever the thieves left behind, scrub the house again and again with every detergent and antimicrobial agent known to man, and planning elaborate and extremely painful retribution for the perps.

Can there be a silver lining to this cloud? The answer may surprise you. Come join me as I post today on the Novel Spaces author blog: Adversity: Friend or Foe?

Oh, the snakes. I promised snakes. Yup, we've been busy around here. As the repairman finished fitting a new back door to replace the one the thieves broke down to gain entry to the house, he trod wearily out the front gate - it was nighttime, after all, and he'd had a long day - only to start dancing around and shrieking because he had almost stepped on - you got it - a mapepire right outside our gate. Mapepire is the local name for fer de lance, a deadly pit viper. We have lots of them around here, and believe me, they're not what one wants to face after a hard day's - and night's - work.

Review of Any Woman's Blues, a Novel of Obsession by Erica Jong

Let me confess right up front that I'm an Erica Jong fan. I was titillated and shocked by Fear of Flying in the 80s, then read How to Save Your Own Life at the start of the 90s and it became, and still is, one of my favourite novels. Yes, Erica/Isidora/Leila seems obsessed by sex - but then who isn't? Because, you see, our libidinous heroine is not just after mindless coupling. She's not simply promiscuous. She doesn't use sex as a tool to manipulate men or situations. What she's after is what we all crave, although some of us don't have the wherewithal - or the guts - to take the quest as far as she does. What she craves is connection, the 'zipless fuck', the skinless encounter that takes us out of ourselves and that we approach only when the coupling is at its most vital, most intense, most passionate and probably most obsessive.

Jong has inspired me for years with her heroines and their lack of sexual inhibition, and with her honest and fearless writing. She goes where most of us writers - and readers - fear to tread, into the physical and psychological messiness, the self-sabotage, the contradictions, strengths and weaknesses of a woman trying to live as authentically as she can, in a society and time where female roles have changed dramatically on a superficial level, but much less so at the heart of things. Becoming a rich, famous author doesn't make the real deal any easier; if anything, it facilitates delusion, avoidance and self-destructive behaviour, but even at her worst there's an endearing self-awareness and deprecation that redeems Jong/Isidora/Leila.

It doesn't hurt that Jong can write; she puts you there, right into the story, even when you want to stand aside and judge: you're a woman, and you recognise, nay, you own the neuroses. Plus, I love the way she sends me off to research all those classical/literary/cultural references that have become hazy over the years. Another reviewer (on Goodreads) hated this. I don't. It adds to the richness of the experience for me.

So why the three star review? Why not four or five stars? Because I enjoyed How To Save Your Own Life more. Because so many of the themes are repetitive, which should not work against her because that's the way life is, but this is literature, and it does. Because I'm somewhat impatient with the heroine's substance abuse. I'm beginning to understand why people do it, why they are driven to seek escape from themselves by any means necessary. All the same, I can't help but be judgmental about this aspect of Jong's character(s). Life is hard, and it f***ing hurts, but medicating/drinking/drugging one's way through it gets no respect from me. Also, although I'm partial to New-Agey gobbledegook, sometimes it can seem like so much, well, gobbledegook. It's not Jong's fault; if I'd read the book when it was written I might have been more patient with this aspect of it. But two decades have passed since, and I've grown up a bit, and grown more discriminating. The 'California way' has palled somewhat.

Join me on NOVEL SPACES as I turn the spotlight on those pesky words that go undercover and evade the editing scissors despite our best efforts.

Email ThisBlogThis!Share to TwitterShare to FacebookShare to Pinterest
Labels: language

I'm truly delighted to host KS Augustin, fellow author, fellow Novel Spaces member, IT specialist, martial artist, and much more besides! Science-fiction romance is her first love, but she has also dabbled in fantasy and contemporary action romances, picking up a CAPA award nomination along the way. She was a Spectrum award finalist and has appeared on the Fictionwise Best-Seller List. Kaz has visited, lived and/or worked in the UK, North America and Australia, and has now settled back in south-east Asia. Without further ado, I give you... KS Augustin!

You can't believe how happy I was to discover Liane! The one thing that I love about being a writer is the ability to form friendships with extremely talented people from around the world. And, considering that Liane is in Trinidad and I'm in Malaysia, that's some distance to cover.

But one thing that also brings Liane and I together is language. With all those North Americans filling up the ether, it's nice to touch base with someone else who uses British English. You wouldn't think it's such a big deal, would you? It is. Finally, someone who can spell “centre” correctly. ;) Who's not going to confuse me with usage of the word “fanny”. (What, you mean...there [pointing to one part of the anatomy]? But I thought it meant...here [pointing to another part]?) Who knows that you cut up your meat as you eat it, not all at once at the beginning.

There's also a certain reserve to those of us who don't use US English. We're the more shy, retiring type. It takes a major effort, plus crowbar work, to get us to actually (shhhh!) promote ourselves. Mix in a Roman Catholic education and it's a wonder we don't faint the moment we're introduced to someone new. Oh yes, take all the neuroses of the average English person you've always read about, inject it under the skin of a colonialist education mixed with Catholic guilt for just breathing and you have us. ::waving:: Hi.

So, in true self-deprecating fashion, that's my roundabout way of introducing you to my latest novel. It's a science-fiction romance about an astrophysicist, the man she falls in love with and a weapon of immense destruction. But, it's written in UK English and I'd like to give each and every member of the Carina Press editorial board a big, smoochy kiss for that alone. Thank you Carina. And thank you Liane.

The Republic had taken everything from Moon―her research partner, her privacy, her illusions. They thought they had her under control. They were wrong. 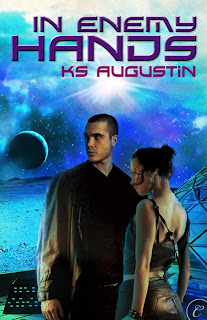 While he and Moon work on a method of bringing dead stars back to life, attraction between them flares, but that poses its own problem. How can their love survive when Srin forgets Moon every two days?

When she discovers the lethal applications her research can be put to, Moon knows she and Srin are nothing more than pawns in a much larger game. Together, they must escape the clutches of the Republic before they become its scapegoats. But there are too many walls around them, too many eyes watching. They want to run, but they're trapped on a military vessel in the depths of space, and time is running out....

COMPETITION: I'm giving away two copies of IN ENEMY HANDS at my blog, Fusion Despatches. To be in the draw, stop by and comment at the Competition post, telling me at which blog you read about my book. You have till 30 June!

Kaz Augustin is a Malaysian-born writer of science-fiction, romance, and permutations of the two. Her website is at http://www.ksaugustin.com and she blogs at http://blog.ksaugustin.com You can also find her on Facebook and Twitter; just look for “ksaugustin".
Posted by Liane Spicer at 00:01 4 comments: