I'm the language police and you're under arrest! 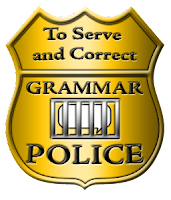 Back in 2007 when I was still new to blogging I was unceremoniously pulled over by a helmeted laptop cop, a regular visitor to my blog, who cited me for misspelling ad nauseam. I Googled the expression and discovered that my version, ad nauseum, did not exist. Duh, I told myself. The expression is derived from nausea, so where on earth did I get that second u? I did a quick search of the blog and found I had misspelled the word not just in the current article, but in another I had posted a few months earlier.

My gratitude for that citation was profound. I had always been a little--okay, a lot--impatient with writers who inadvertently break the rules of the language in their Internet scribblings (and, needless to say, in their books). Yet I had made this egregious spelling error on my own blog, not once, but twice. I was mortified, but thankful for the directness of the language cop. I admired her seeming inability to shrink from what some might consider a sensitive issue. I imagine that all writers are sensitive about errors in their work; I know I am, which is why, unlike my blog friend, I rarely point out glaring errors in the writing of authors I know--the exception being friends who ask me to edit their work and clients who pay me to do so.

Correcting minor errors in articles submitted by guests of Novel Spaces is something I do routinely. As a blog administrator, I also correct typos, incorrect formatting, and sometimes language errors in members' posts, not routinely, but now and then when I stumble across them. What I never do is send an e-mail to the author citing him or her for the mistakes.

I know, I know. I'm a craven coward who dreads causing offense or embarrassment. I've seen the reactions of writers across the web to having their errors pointed out, heard the screams of "Spelling police!" and "Grammar Nazi". I also have time constraints like everyone else; it's more efficient all around to just make a quick edit and move on. But I never do this without a little pang of remorse. The spelling-cop (who became a good friend) ensured that I'd never again embarrass myself on the world wide web or anywhere else by writing ad nauseum instead of ad nauseam.

What do you do? Do you point out language errors to writers as you find them in the knowledge that every word we write, even informally on the Internet, reflects on us professionally? Or do you just you move along knowing that we all err at times?
Posted by Liane Spicer at 01:26 2 comments:

In my last two posts on writing advice from the greats, we looked at Kurt Vonnegut's 8 tips for writing great stories and 6 writing tips from John Steinbeck. These guidelines worked for Vonnegut and Steinbeck, and they'll work for you. I've been guilty of doing the opposite of what successful career writers do: I've worked on too many things simultaneously so I began to feel overwhelmed and could not focus on any; I've wasted time waiting for inspiration or the right 'mood' to get down to work; I've edited to death instead of finishing and starting a new book... My transgressions run the gamut, and some are an ongoing challenge, but re-reading proven advice from the masters always gets me back on the rails. 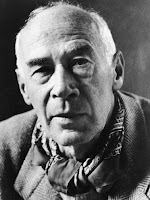 We'll wind up the series with some advice from Henry Miller. Enjoy!


There it is - the best writing advice I've found. You'll find many other authors repeating the tips in these three articles. My own advice is to take what works for you and dump the rest. Take Miller's #11, for example. You can't always write first; children, day jobs, illness, general vicissitudes of life can get in the way. But if we make our writing a priority and follow much of the advice at least some of the time, we'll stand a better chance of completing the stories we want to write.

Posted by Liane Spicer at 01:23 No comments: