The drought has been terrible and the hills are burning, but in my mother's parched garden these plants continue to pleasure the eyes and the spirit. 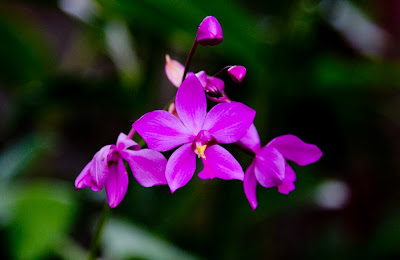 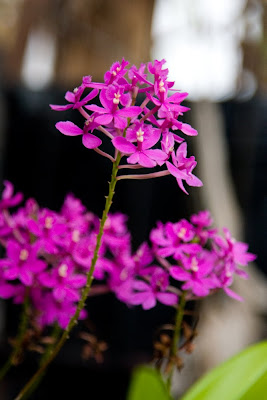 Another orchid in a hanging basket. Don't know the name of this one... 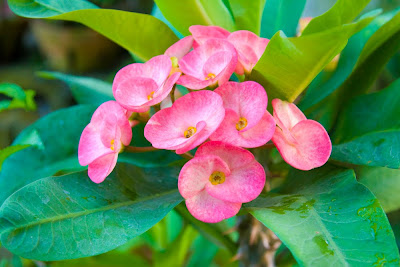 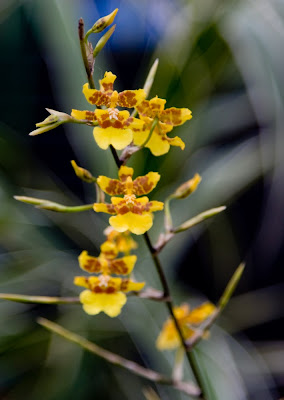 Oncidium or bee orchid growing happily in rubble in a basket 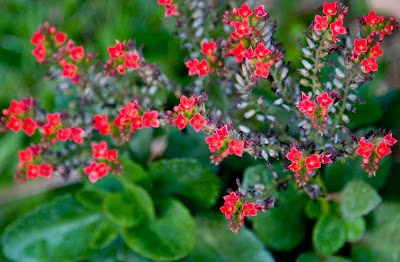 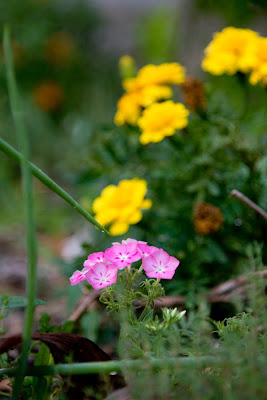 Marigolds in the background. Phlox and chives in the foreground. Yeah, my mom mixes it up, vegs and flowers in the same beds and borders.

Come join me on Novel Spaces today as I continue my feature on the works of great Caribbean writers!

World Literature: The Caribbean (2)
Posted by Liane Spicer at 15:03

In the news today...

My writer-buddy Vaughn celebrated a birthday recently so I took him out today to induct him into the Death by Chocolate cult of which there are two members I know of, my friend D and me. (I neglected to take a photo of the DbC so I'll just say it's large, and there are lots of chocolate things in it, like chocolate ice-cream, chocolate sauce, chunks of brownies and more stuff that I can't recall. Then there's whipped cream and a cherry on top. And an umbrella; umbrellas are important.)

Vaughn seemed to have a slight problem first with the fact that, according to him, there were no men in the place. When I pointed out three of his gender he complained instead that the place was, ah, pink. He seemed to think that particular colour scheme indicated dire things about portion size. (Men are really hung up - no pun intended - on size.) He eventually looked at the menu and discovered there was actual food to be had, and not just dainty, pretty, small things, so he brightened up considerably. By the time the Death by Chocolate dessert came around he had settled down and was as close to normal as he gets, which ain't sayin' much. Here he is in the pink place, with the initial get-me-out-of-here expression on his mug: 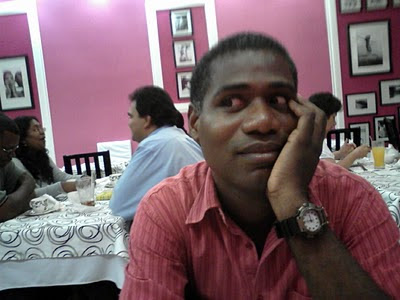 I have another photo of him rolling his eyes and looking really freaked out, but I'll refrain from posting it as we don't want to scare the, ah, horses.

Verdict: the membership now stands at three. D, we've got a convert!

In other news... I read the Sandra Bullock-Jesse James revelations and could not help but feel sad for the woman. The timing well and truly sucks, for one thing, and for another, Ms. Bullock appears to be such a great person. I know from personal experience that many (most?) good people get effed over in matters of the heart. The hardass badasses, on the other hand, seem to thrive. But then that's probably my cynicism, always at war with my romanticism, kicking in.

And to round up the Friday bulletin: The school to which I applied requested a sample of my writing. I'm enclosing a copy of Café Au Lait but knowing how snobbish universities tend to be about the romance genre, I'm also enclosing a serious review I wrote a while ago that was published in newspapers in Trinidad, the Bahamas and Florida, as well as a short story and a personal essay. Hopefully the powers that be will forgive me for writing a romance novel - long enough to let me into their program, anyway. Wish me luck.

Have a great weekend, everyone!

Update: Vaughn thinks I should refrain from enclosing a copy of the novel with my sample writing. You know what? He's right. Out it goes.
Posted by Liane Spicer at 21:27 12 comments: 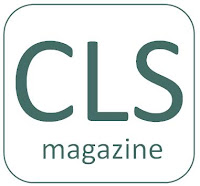 Anouska Kock, moderator of Caribbean Literary Salon, has posted her interview with me on the brand new site:

CLS is a treasure house of all things literary in the Caribbean, and I can tell I'll be spending a lot of time there. Ms. Kock is from Aruba, a Dutch island in the Caribbean, and the CLS site showcases not only English-language related information on the world of West Indian books, writers and poets, but also a Dutch-Caribbean version with the focus on Suriname, Bonaire, Curaçao, St. Maarten, and, of course, Aruba.

The community site features, among other things:
Caribbean Literary Salon is just three days old and already I'm very excited about it. Membership is open to anyone who enjoys books about the Caribbean and the works of Caribbean authors. I signed up today; come join me!
Posted by Liane Spicer at 20:23 7 comments: