Nostalgic for my roses

I've been a fanatic rose lover ever since the morning I stepped outside and discovered that the bud on my mother's new Tiffany hybrid tea had opened overnight. Up to that point in my life - I was about nine years old - I had never beheld such beauty, and rarely have since. The perfectly formed petals had a silvery sheen, and in the early morning there were droplets of dew or raindrops that caught the sunlight, forming glistening diamonds in the round. I squatted as close to the bloom as I could, inhaling the famous perfume and just trying to absorb the reality of such an extravagance of beauty.

Fast forward twenty-something years. I had recently moved to a little valley in the north of the island with my son and, joy of joys, there was a garden. The landlord gave his permission for me to plant a few roses along the front wall and the first bush I purchased was, of course, Tiffany. I also got Princesse de Monaco, Garden Party, Olympiad, and another of my mother's favourites, Queen Elizabeth.

The roses gave us a lot of joy during those years despite the never-ending battle with black spot in our damp, humid valley. The first blooms on the Garden Party were the hugest I've ever seen on a bush - glorious creamy globes that glowed in moonlight. Olympiad became my favourite red rose ever despite efforts by other enthusiasts to woo me to the likes of Chrysler Imperial and Mister Lincoln. Princesse Monaco was outstanding in form, colour and the sheer number of blooms on the bush in any flush. I remember my son shocking a neighbour across the street by identifying a new rose she had bought, Double Delight. (He had fallen in love with it in my books and wanted me to get him his own bush. In typical kid fashion, he loved the bi-coloured and candy-striped varieties that I found way too garish.) So many vignettes...

We left that valley in 2000 and went off on our various adventures. I bounced around a few countries and for the last few years have been living in my mom's house in a different part of that same valley. Things are different now, though. She has a garden, but doesn't grow roses and even if she did, they would be her show; she is very territorial about her yard.

I miss my roses. My vases are packed in boxes (like most of my books, photo albums and other treasures). I look forward to the day when I'll have a garden of my own once more, with roses I raised from scratch. I want to get up in the morning and cut one perfect Tiffany bud, with the dewdrops still on, for my desk. Of such are the great joys of my life made.
Posted by Liane Spicer at 15:33 2 comments: 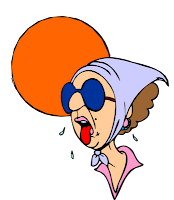 I live on an island located within spitting distance of the equator and the setting on the regional thermostat is stuck at HOT. I don't thrive in heat; it makes me want to do nothing more strenuous than lie around and pant while fantasizing about diving headfirst into a pool filled with chilled watermelon cubes, or having a clutch of buff, dedicated young men in togas take turns at sliding ice cubes all over my skin. Focusing on anything that takes actual effort, such as writing, is really asking too much.

The first thing I do on entering the house is strip; once I'm in the privacy of my home I wear little or nothing. I've written roughly half a million words of fiction, most of them in the buff (or close), late at night when the air has cooled enough to render me capable of coherent thought.

My relatives and friends who know of my aversion to clothing are unanimous in their verdict: "Girl, you're CRA-ZY!" I was therefore delighted to stumble across an article this week that proved I was not alone in my strange (to others, utterly natural to me) predilection for writing au naturel. These famous authors did not live in the tropics, to my knowledge, so heat and humidity could not have been that much of a problem for them, but they're kindred naturist spirits.
I'm in such great company. I can't help wondering, though: Are there other closet naturist writers out there - or am I the last survivor of an almost extinct species?

Wanted to write about how much her music has meant to me, about the beauty of that peerless voice, about the way great gifts always seem to exact their price in pain, how I agonized for her, how the "celebrity" industry cannibalizes its own, how one can have everything yet never have it all. But I've read too much and heard too much and seen too much these past few days. I'm sick of all the words.

Thank you for the music. I'll try to take the advice in this song. It's not working right now, though...