NaNoWriMo? Not for me—or is it?

Never, ever have I been even remotely tempted to participate in NaNoWriMo. Not once. Not even part of once—you get the idea. I always figured that spitting out 50000 words in a month is just a bit silly, and that the focus on quantity over quality would not work for me. But something strange happened over the course of three weeks from the end of November to roughly the middle of December. I began writing a short story that I'd had in mind for years, and the story 'magically' grew into a novel. In three weeks! I was writing 3000 to 7000 words a day most days, and before the end of those three weeks I had a complete first draft that weighed in at 55000 words.

I'm not sure exactly how it happened, and I still don't quite believe that it did. The story was so much fun that I just kept going. There was no pressure to meet a goal because I had completed the original target of writing the short in two days. There's also the fact that I was in procrastination mode: I was supposed to be working on a paper on critical and cultural theory, which apparently motivated me to focus all my attention and energy—elsewhere.

So who knows? Maybe it's time for me to rethink NaNoWriMo. Seems I may have stumbled across a foolproof formula: 1. It must be a lighthearted, fun project, and 2. There must be something else of critical (pun intended) importance that I absolutely should be doing during that time instead of fooling around making stuff up. Now that I've figured this thing out, I might actually give NaNoWriMo a whirl next year.

Here's wishing the community of writers and readers a very merry Christmas and a productive, healthy and happy 2016. Jewel Amethyst shared the meme below on Facebook and it encapsulates my sentiments for the season perfectly.

Lots of love and warm hugs to all! 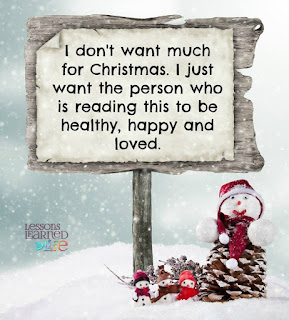 ~Liane
Posted by Liane Spicer at 22:04 No comments: