Try to picture a writer at work and what comes to mind? I'm willing to bet it's something like Johnny Depp's character in Secret Window—wearing a garment so ancient and ratty he could push his fist through the holes and still have room to spare.

I'm here to tell you that writers do not dress like that for work: we discard the robes when the holes are big enough for us to poke two fingers through.

Not long ago, the issue of attire came up among Novel Spaces members. Several of the females confessed that we—cough—they pretty much lived in jeans and sandals and avoided events and places that required anything more complicated. Certain male members, on the other hand, appeared to think that 'formal' and 'business casual' meant they had to wear pants. The only reasonable conclusion to be drawn was that male writers, um, hang around pant-less much of the time.

Ratty bathrobes, no pants, jeans, sandals, and event avoidance? We decided an intervention was needed. After much intelligent discussion we arrived at a sensible dress code for writers. Since there is no way to enforce any kind of code in the privacy of people's homes, we stuck to public appearances—the ones we can't come up with creative reasons to weasel out of. 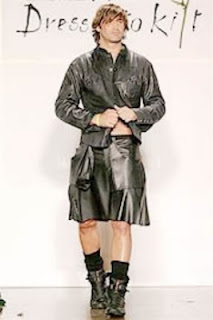 The Novel Spaces sartorial code
The code was proposed, ratified and adopted by all. Writers, be guided accordingly.