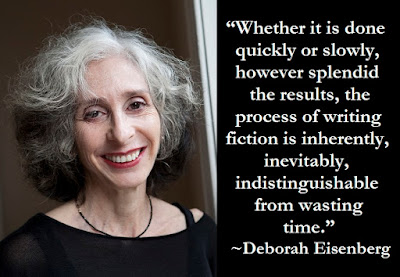 Kevin Killiany's column on August 19, "I Was Just Getting To That", touched on a sore issue for me: disrespect for writers' time. Except for the big guns—who I assume command respect based on their impressive royalties and resultant lush lifestyles—nonwriters regard your writing as a kind of sneaky self-indulgence at best, or an affectation at worst. The expression "I'm working on a novel" has somehow become synonymous with pie in the sky or dereliction of duty.

One of the problems with intentional interruptions—and part of the reason there's so much disrespect for writers' time—is that the writing process looks like wasting time or just chilling to others. Writing is hard work, but nonwriters think we're having them on when we say that. Case in point: back in December I achieved what I think is a personal record: I wrote roughly 8,000 words, the first draft of a short story, in one day. I was in the flow and I just kept going until I reached the end. I don't recommend these marathons although they sound impressive, and the reason is that I was completely fried: I spent the day after my marathon in bed, firing up the laptop for short stints to work on the edits for another project. To anyone who saw me in crash mode that day, I was just lying around doing nothing. They have no idea that I crashed because I did four days' writing work in one.

When I taught high school, no one visited or intruded on my work unless there was a real emergency. A call during school hours was rare—like that time my brother whacked off several of his toes while mowing the grass barefooted, or the day he was found alive after being lost at sea for three weeks. Now that I'm a home-based writer, however, everyone thinks I'm accessible all the time. It's really annoying.

The question Kevin raised about whether the writing or your family is more important should not even arise. It's unfair, a straw-man argument that has no correlation. No one ever suggested I should abandon my students back in the day to run errands, do laundry or clean the house. I did what I could manage around my workdays, and what I could not do had to be postponed. The hours the job required were inviolate. Not so a writer's hours.

I don't expect that nonwriters—and especially the families of writers—are going to develop respect for what writers do anytime soon. It's therefore up to us, the writers, to respect our own writing time, to growl, bark and bite when we need to so that we get the point across: writing is a job and trying to do it around the edges of other people's expectations of us and demands on our time won't cut it. Be strong. Be firm. And eschew the guilt.