Let me tell you about my favorite mountain. It's in the northern range of the island, to the east of Maracas Bay, that very bay featured in the masthead above (Ed. note: the masthead changes so the one you see might not be the one that features Maracas Bay). See the cloudy area at the top right of the photo? Go inland a bit, and east some more, and there's my mountain: El Tucuche. In school we were taught it was the second highest mountain on the island, and according to local lore, it was considered a sacred place by the Amerindians. The only known Amerindian glyphs in Trinidad occur on a rock outcrop here. I've hiked El Tucuche twice in my fitter days when I belonged to a naturalist group.

That first time was the hardest hike I've ever tackled, and I've been on quite a few. It makes No Mercy Hill on the trail to Paria Bay look like something in a child's sandbox. The first time I ventured up there I didn't think I'd make it home alive. On the way back down the mountain I was sick and trembling and wanted nothing more than to lie at the side of the trail and die. But, with the help of a fellow hiker (wonder what became of Vibert?) I made it down more or less intact (although my toenails slowly turned black and fell out and took forever to grow back).

El Tucuche, Trinidad
Image courtesy Carole Anne Ferris/CafeMoka Gallery
But the climb was so worth it. It's another world up there on the peak, where mists swirl through the trees and imbue everything with an eerie other-worldliness that defies description. The vegetation is different, and so is the fauna. Strange bird calls abound, and the frogs are painted in such brilliant colours they must surely be poisonous. This is the home of the El Tucuche golden tree frog, found only here and on that other bump on the local landscape, El Cerro Aripo. The ground is cushioned with super-thick, bright green moss that's a balm to feet that have been abused for hours.

After the last steep scramble there you are, on the plateau at the summit of the mountain, with the world spread at your feet. At first you're too exhausted to do anything but sit or lie there, semi-comatose, dreading the long, arduous hours of descent still ahead, but as your breathing slows and your heart stops pounding and there's a glimmer of light in the dark vortex of weariness that has become your world, the euphoria begins to set in. You did it! My first-hand experience of the devastating beauty of the physical world, especially on these hikes where I'm able to climb above the clamour of man-made existence, is one of the main reasons I'm not an out-and-out atheist. To me, it's as irrational to think that the universe is some random accident as my strange substantiation of intelligent creation must be to a nonbeliever.

But I digress. The second time around, El Tucuche was still a long, hard, exhausting climb to the top and back down, but I fared much better. The "never again!" of the first round gave place to "well, maybe I can be persuaded to make it a hat-trick".

There's an amazing footnote to the El Tucuche anecdote. Some years ago, there was an announcement that more accurate measuring technology had revealed that El Cerro Aripo, formerly believed to be Trinidad's highest mountain, was actually the second highest, and El Tucuche assumed its rightful place as the point on the island that comes closest to touching the heavens, a fitting tribute to that strangely shaped rock at the top of the world. Well, my world anyway.

...and another amazing footnote:
Raymond Banfield contacted me after reading the article above. He's a 90 year old veteran climber who has scaled El Tucuche more than 100 times over his lifetime - and still climbs it! His most recent ascent was earlier this month as part of his 90th birthday celebrations. The local media covered the event; the link to the Trinidad Express article is here. 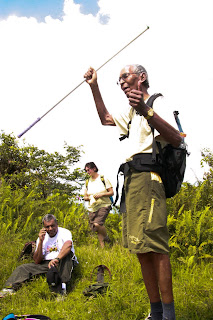 Raymond "Don Ramos" Banfield gives the thumbs up signal on his historic
ascent to the summit of Mount El Tucuche, November 2010
Raymond is planning his next hike to the top for early next year. I can think of nothing I'd like to do at 90 that tops this. Keep on climbing, Raymond! You have become my great inspiration. Hope to see you on the summit some day soon!
- November 20, 2010

Note added 19-Nov-2011: Raymond passed away on November 10, 2011, three days after his ninety-first birthday. I'll climb El Tucuche again, and I know he'll be there hiking next to me - in spirit.

love this post - I have never hiked El Tucuche and am nowhere near able to hike things, but maybe it's a goal :-)

Fascinating post and very brave of you to climb after such a trying first esperience.

Misread this and thought you were a member of a naturist group - thought it was incredibly brave of you to climb a mountain in your nuddy-pants! Clothed or not though, that's still one heck of an achievement - and then to do it again deserves hearty congratulations.

Nicely described and you make me want to crawl my way up to the top :)

I also never hiked to El Tucuch and always worry about rolling down and off a cliff ;)

Chennette, my goal is to hike it a third time - not at all realistic at my current fitness level.

Debs, I don't know what made me do it a second time. Wait, I do know: it's the feeling of accomplishment after the ordeal. And it's really lovely up there.

Chris, I'm a naturist at heart... in private! Wouldn't want to be nekkid up on that mountain - too many things that bite, sting and scratch!

akalol, at the end there it was more of a crawl than a climb, all right. You should try it; just stay well away from alcohol and cliff edges! :D

I want to go there! That is so beautiful.

Alcohol and cliff's edges always make for a most memorable hike.

Ahh, Flowerpot, it is beautiful indeed. You'd love it!

akalol, memorable indeed - for the survivors! :)

I love this... Im going to climb it on Saturday. I'm a bit scared since I have not done much hiking but im excited.

This week I'll be working out hard, cycling etc and lady chancellor in order to be ready for Saturday. I know that is not nearly enough time but I hope enough adrenalin is there to keep me on track.

Arrows&Amp, thank you, and best of luck on Saturday! It'll be an experience to remember - especially now in the rainy season.

Hi my name is Inshan. I'm from that village below El Tucuche and I have been going up there all my life save for the last three years. Every time was like the first time...breathtaking and an air of mystery. I see the highest of the three peaks, that make up El Tucuche, from my window and always stand in awe...wondering how the American soldiers back in World War 11 days stayed up there in their Helicopter Landing Base.

Inshan, thank you for dropping by and sharing your El Tucuche experience! It must be wonderful to live within sight of the mountain--I always look out for a glimpse of it when I'm on the north coast road to Las Cuevas, and every time I see it, it looks as mysterious as ever and is shrouded in clouds.

Is the village you speak about Lengua? With a lovely bathing pool in the river a short trek from the end of the road?

It's been many years since I've been to the top of Mt. El, but I hope to go again at least once in this lifetime. :)

I've wondered about the absolute flatness of the area right at the apex. Now I know why! Had no idea it was a copter landing base back in the WW2. Thank you for expanding my knowledge of my favorite mountain!

yes that's correct , that village is Lluengo.Do you it has been rumoured that there is a cave somewhere around that peak. I'm still to prove that true. Let me know whenever you are going ... call Ph- 398-7518. however , you do know about the golden frogs found nowhere else, the giant earthworms measuring about 25 cm... refer to Prof Julian Kenny's Mt El Tucuche.

Inshan, I've never heard of a cave in that vicinity. I've been to other caves--Aripo and Platanal. Attempted to visit the one(s) at Lopinot but the entrance was blocked when I visited.

I know about the golden frogs, but... giant earthworks? Hm. Glad I never encountered those. I'll look for Prof. Kenny's book. I think he was present both times I climbed the peak. That would have been late 1970s or early 1980s when I used to hike with the Trinidad Naturalists.

Thank you for the contact number. I'll contact you if/when I find myself gearing up for another climb.